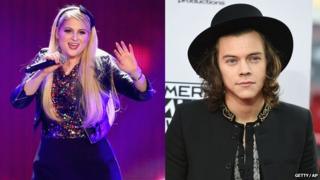 Meghan Trainor has confirmed rumours that she has written a song with One Direction's Harry Styles.

The singer told Nick Grimshaw on the Radio 1 Breakfast show, that she had written a song with the 1D superstar.

She said: "It was unbelievable - he's a very, very talented songwriter, I was very impressed".

Meghan said the song is called Someday Maybe, but she wasn't sure if or when it would ever be released.

Her record All About The Bass has been nominated for a Grammy Award, and spent four weeks at the top of the UK singles chart last year.

Some of Harry's other bandmates from 1D have also teamed up with different artists to write new songs.

Meghan Trainor's All About That Bass hits number one