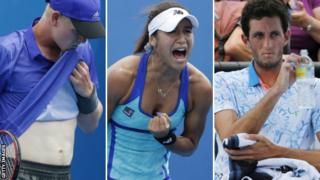 Britain's players suffered a disappointing day at the Australian Open on Monday.

British number one Heather Watson struggled with an illness and ended up losing to Bulgaria's Tsvetana Pironkova.

Also in round one, Kyle Edmund lost to American Steve Johnson.

Andy Murray is the only British player left in round two of the singles draws after beating India's Yuki Bhambri on Monday.