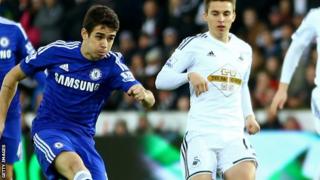 It was another busy Saturday in the Premier League packed with goals, stunning comebacks and late winners.

However, the biggest game of the weekend is still to come when Manchester City take on Arsenal on Sunday.

Newsround rounds up what happened across the country.

Chelsea extended their lead over Manchester City at the top of the Premier League to five points after hammering a poor Swansea City.

The Blues led after just 50 seconds thanks to Oscar's super strike, before Diego Costa scored twice in 15 first-half minutes.

Oscar completed his double moments later and Andre Schurrle finished the thrashing in the second half.

"It was a perfect game - everything went in our direction," Chelsea manager Jose Mourinho said.

The result was Swansea manager Garry Monk's worst since taking over in February 2014 as the Welsh side fell to their heaviest home defeat since being promoted to the Premier League in 2011.

Crystal Palace fought back from 2-0 down at Burnley to keep Alan Pardew's 100% start as manager.

Defender Ben Mee headed in his first goal for Burnley before Danny Ings made it 2-0 for the home side.

But Palace staged a big comeback with goals from Jason Puncheon and a double from Dwight Gayle getting them an important 3 points.

Palace have won all three matches since former Newcastle manager Alan Pardew was hired on 3 January. and the Eagles are now up to 12th in the Premier League.

Burnley, meanwhile, are 17th - just one place and one point above the relegation zone.

Dutch forward Elia got his first goal in England when he fired under Tim Krul after James Ward-Prowse's pass. 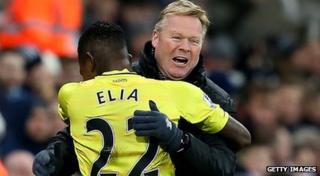 Newcastle equalised when Yoan Gouffran's shot was deflected and spun into the net.

But Elia struck again to get the win and give Southampton the edge over United in the race for third place.

Manchester United bounced back from last week's defeat by Southampton by beating QPR at Loftus Road.

The big Belgian Marouane Fellaini put United ahead with a thumping finish in the second half.

United's confidence increased with that goal and with QPR looking for an equaliser, substitute James Wilson secured the three points on the break in the dying seconds.

Leicester 0-1 Stoke: Bojan Krkic produced a brilliant finish for Stoke to end Leicester's chances of climbing off the bottom of the table for the first time in two months.

Aston Villa 0-2 Liverpool: Goals from Fabio Borini and Rickie Lambert got Liverpool their third away win in a row and increased the pressure on Aston Villa manager Paul Lambert.