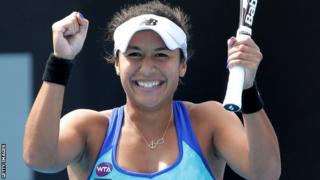 Watson, ranked 49th in the world, is the first British woman since Anne Hobbs in 1985 to win a second tour title.

The 22-year-old from Guernsey did not drop a set throughout the week.

She will play Bulgaria's Tsvetana Pironkova in round one of the Australian Open on Tuesday.

"Thanks to my coach Diego, its been great working with you," Heather said after the match.

"We work really hard but we also have fun."

Heather Watson quiz - test your knowledge of the tennis ace