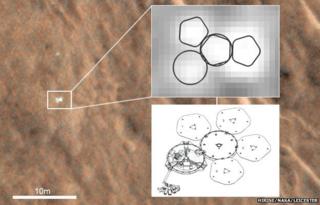 A Mars explorer robot that went missing on Christmas Day eleven years ago has been found on the planet's surface.

Images taken from orbit have found where the British-built robot landed, and it looks like it's intact.

The probe, called Beagle2, tried to land softly on Mars back in 2003, using parachutes and airbags.

But scientists were never able to get radio contact with the robot. Many thought it had hit the planet's surface too fast and had been destroyed. 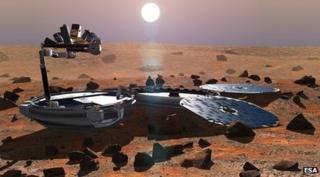 ESA
Beagle2 had a number of fold-out solar panel "petals"

What happened to the probe remained a mystery for 11 years - until earlier this month.

The new pictures, from a Nasa satellite orbiting Mars, show Beagle2 wasn't destroyed after all, and may have solved one of the biggest space mysteries of recent years.

The lander had a number of solar panels that were meant to unfold when it touched down. The new images suggest these didn't work properly, meaning radio signals couldn't be sent back to Earth.

Scientists behind the project believe it was just sheer bad luck that things didn't work out, and the mission was frustratingly close to being a success.

Sadly there's nothing that can be done to revive the probe, meaning it'll remain silent forever in the red dust of its Martian home.