Two adventurers have completed a record breaking free-climb of the El Capitan mountain.

Tommy Caldwell and Kevin Jorgeson have been climbing the Dawn Wall of El Capitan, a rock formation in Yosemite National Park, USA.

It's been described as the most difficult climb in the world, because the face is so steep, so tall, and so smooth.

The two climbers took 19 days to complete it and are the first people to free-climb this route.

What is free climbing?

Free-climbers use just their hands and feet to climb a mountain, rather than using tools or pulling themselves up on ropes.

They wear rubber shoes to help their feet cling to the rock face, and climb up the rock face using their fingertips.

But the men were also attached to safety ropes to stop them from falling all the way down if they slipped.

Even so - if you slip, you fall 20 or 30m before the rope catches you - so you have to climb all that way up again.

How difficult was the climb?

The Dawn Face of El Capitan is one of the hardest rock faces in the world to free-climb.

It's a massive 914m tall - three times the height of The Shard in London, and taller than the biggest skyscraper in the world. 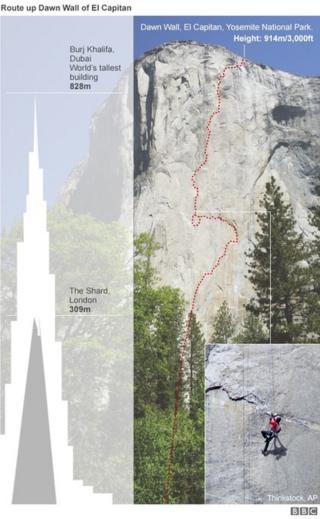 The rock face is made of smooth granite stone and there aren't many places to hold on. 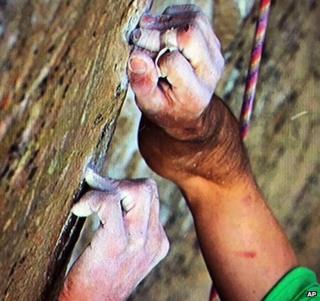 AP
The climbing takes its toll on fingertips!

Leo Houlding, a professional climber, said: "Hanging on to tiny little holds with all your bodyweight, and all the power you can create, starts to shred your fingertips!"

He added: "After a week you have very little skin left."

The climb took more than two weeks so the men had to sleep in beds hanging from the rock on ropes.

They also had to take breaks to let their fingers heal.