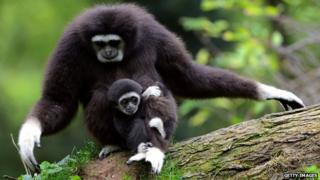 Scientists are using computers to try and work out what gibbons - a type of ape - say to each other.

Researchers at the University of Wisconsin believe some animals use much more complicated 'language' than previously thought.

It's not just gibbons either - they are studying communication in rats, dolphins and other animals.

They think it might be possible to create a kind of animal 'dictionary' for certain species.

While chimps and gorillas use grunts to communicate with each other, gibbons use a string of sounds as if they were singing.

These noises may be heard to be 'oos' and 'waas' to us, but all is not as it sounds!

According to the New Scientist magazine, researcher Michael Coen has written a computer program called an algorithm that's able to detect differences in the whoops of gibbons that human ears cannot.

Using this program they've been able to work out 25 or 26 basic "words" used by the animals. These are often strung together in what sound like simple sentences.

Michael has also created a piano-like machine that replicates their many sounds.

With other research projects around the world looking at how rats, dolphins and other animals communicate, it may be that one day we really are able to talk to the animals.