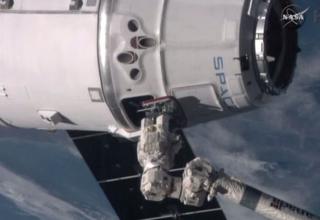 It has delivered much-needed supplies for the astronauts on board.

Commander Butch Wilmore used a robot arm to grab the capsule and bring it towards the ISS.

The space station's six astronauts were low on supplies because a previous supply ship - owned by Orbital Sciences - was destroyed in an explosion in October.

Last week, SpaceX launched a different rocket which it hoped could return to Earth and be reused.

But the rocket came back down to Earth and broke apart.