How to spot Comet Lovejoy in the sky 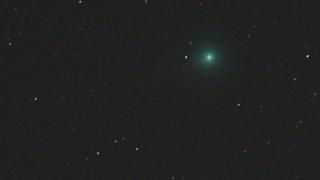 Space fans will have the chance to spot a glowing green comet on a close approach to Earth tonight.

Comet Lovejoy will appear in the night sky and will be just about visible with the naked eye, as long as there are no clouds in the sky.

To the naked eye it will appear as a small grey smudge without the glowing trail.

If you have a small telescope or binoculars you may be able to spot Lovejoy as a glowing green ball.

It last passed through our solar system 11,500 years ago and once it leaves again it won't return for another 8,000 years!

Even though the comet is close to Earth, it's still a whopping 44 million miles away!

Comet Lovejoy is big chunk of ice which orbits the Sun.

It was discovered last year by an Australian astronomer called Terry Lovejoy. He's already named five comets after himself!

Be careful! Comet Lovejoy is only visible at night. Never look at the Sun through binoculars or a telescope or you will damage your eyes.