How does the world's biggest cargo ship work? 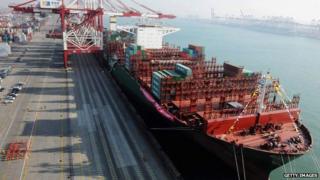 The world's biggest cargo ship has docked in Britain for the first time.

The Globe was built in South Korea and has arrived on its first trip.

It's all down to the ship's massive size, and something called displacement.

What the CSCL Globe can carry

For a ship to float, it has to push its weight in water downwards - or displace it.

Once it's pushed down by the ship, this water pushes back upwards - and floats the ship.

So the bigger the ship - the more water it pushes down. 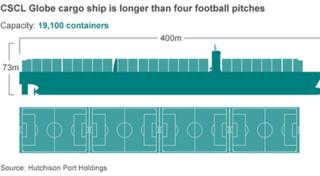 If you laid every cargo container the ship can carry end to end, they'd stretch for 72 miles.

It's also important that the heavy cargo crates are put at the bottom of the ship, and the lighter ones at the top. This stops the ship swaying when it's at sea.

So once a ship of that size is floating - how does it move?

It needs a big engine. And the Globe does not disappoint.

According to the company that made its diesel engine, it's the biggest ever. 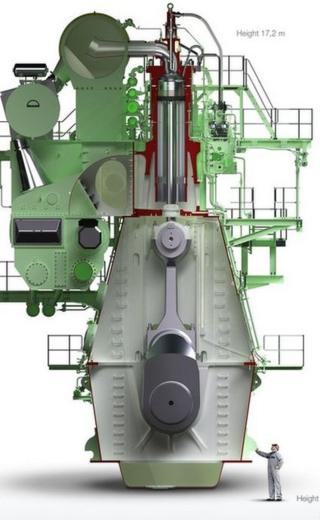 It's over 17m tall and can generate the power of 38,000 powerful vacuum cleaners!

How big can ships get?

With engines and ships so large - just how big can they get in the future?

The Globe will only have been the largest on the planet for a total 53 days. 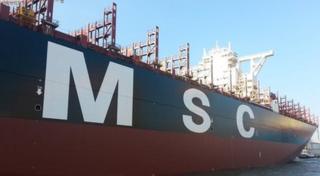 MSC Oscar will overtake it when it first sets sail at the end of this month. It'll be able to carry about 5% more than the Globe.

Bigger ships are appealing to transport companies because they can move more cargo per trip - saving money on fuel.

There are downsides though to larger ships - those big enough to carry 18,000 containers or more are too big to stop in many ports around the world.

In fact they can only sail between Asia and Europe, with ports in countries like the USA being too small to hold them.

The Globe even takes up two giant parking spaces as it's docked in Felixstowe.