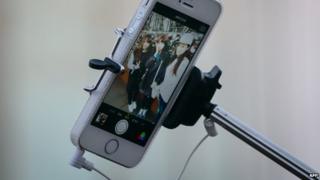 The North London football club Tottenham Hotspur have banned the 'selfie stick' in their stadium.

The extendable sticks are used with smartphones and cameras to capture a better selfie.

The sticks were banned already from games but after a complaint from a fan, the club has said they'll be confiscated if brought into the ground.

The first game with the ban in force was the 5-3 win against London rivals Chelsea.

'Selfie' named word of the year by Oxford Dictionaries