Steven Gerrard will move to LA Galaxy in US 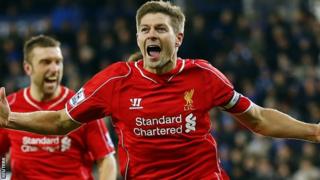 Reuters
Gerrard has been at Liverpool since the age of nine

The former England midfielder, 34, will play for the Major League Soccer club after his contract at Anfield ends.

"I'm very excited to begin the next chapter of my career in the United States," said Gerrard.

"The Galaxy are the most successful club in MLS history and I'm looking forward to competing for more championships in the years to come.

"One of the reasons I chose them was because of the success they've had recently. I want to add some medals and trophies to my collection."

Gerrard, who has won 10 trophies at Liverpool, including the Champions League in 2005, becomes the second England captain to join LA Galaxy, after David Beckham played for them between 2007 and 2012.

"He is one of the most decorated players in the world and will join our team with a wealth of success playing at the highest level of the sport.

"Steven will be an excellent example to our young players and we're excited to add him and his leadership."