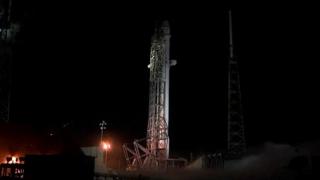 An experiment to test a new form of space transporter rocket has been put off until Friday morning because of launch problems.

SpaceX, a private company, wants to create a rocket that can be re-used.

After launch, once the first stage of the rocket has finished its blasting off work, it is designed to return to Earth to try to touch down on a barge.

If they can make this work, it could make space travel and transportation much less expensive in the future.

Normally, all rocket segments are used only once and are destroyed as they fall back down towards Earth. 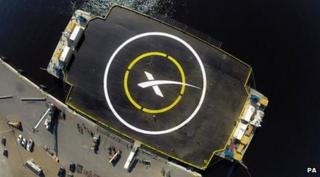 PA
The landing platform - about the size of a football pitch

But SpaceX say they can't be sure of success: they feel their chances are no better than 50-50.

"I'm pretty sure this will be very exciting, but, as I said, it's an experiment," said Hans Koenigsmann from SpaceX.

"There's a certain likelihood that this will not work out all right. It's the first time we have tried this - nobody has ever tried it as far as we know."

Why is it so difficult?

SpaceX have described trying to return the rocket to Earth safely as "like trying to balance a rubber broomstick on your hand in the middle of a wind storm".

They're trying to get the rocket to land on a floating platform 90m long by 50m wide - about the size of a professional football pitch.

While that might sound like a large area, hitting that target (which will be moving, in the Atlantic Ocean) from space is like trying to shoot an ant 100m away with a bow and arrow.