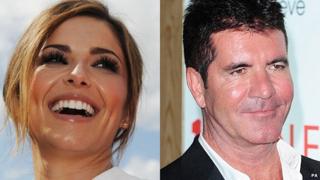 Cheryl and Simon will be up against David Walliams and Mary Berry in a new TV judge category.

The X Factor, Strictly Come Dancing, The Voice UK and Britain's Got Talent will do battle for best talent show.

But not so good news for actor Peter Capaldi who hasn't made the shortlist for top drama performance.

It's the first time the star of Doctor Who hasn't made the shortlist since the show was revived. 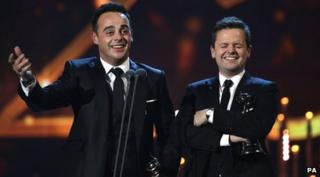 PA
Ant and Dec are NTA favourites - and this year's no different!

Ant and Dec, who've won big at the awards in the past, are nominated in the Entertainment category, for Saturday Night Takeaway and I'm A Celebrity... Get Me Out Of Here!

Last year the Geordie duo were given a special landmark award celebrating their 25 years in showbusiness.

Best Talent Show will see a huge battle between Strictly Come Dancing, The X Factor, The Voice UK and Britain's Got Talent.

The NTAs are voted for by the public and the awards ceremony will take place on 21 January in London, presented by Dermot O'Leary.