The next 24 hours are "critical" in the attempt to refloat a ship stranded off England's south coast, an expert says.

The Hoegh Osaka car transporter was deliberately grounded on a sandbank to prevent it from completely overturning.

Capt Nicholas Sloane, who led the salvage of the Costa Concordia cruise liner, explained that the sandbank on which it is sitting could start to wash away, and destabilise the ship.

"The main thing is to stabilise and bring [the ship] upright," he said.

"The next 24 hours are critical to see the behaviour of the sandbanks, whether the sand migrates away from the starboard side or the port side.

"The tidal conditions could cause some erosion of the sand itself," said Capt Sloane.

He was in charge of refloating the Costa Concordia cruise ship, which sank off the coast of Tuscany in Italy in 2012.

Salvage experts boarded the Hoegh Osaka on Monday and are trying to work out a rescue plan. 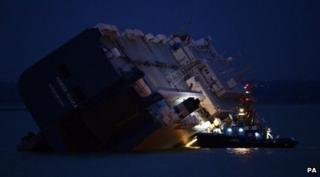 PA
The ship is leaning at a steep angle

Inside the ship are around 1,400 cars and 500 tonnes of fuel oil. All crew were safely rescued off the ship on Saturday night.