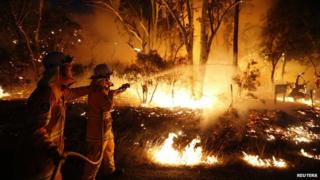 Firefighters are struggling to contain the latest bushfires in Australia. But what causes them and can anything be done to prevent the fires?

Bushfires are common throughout Australia. They're made more likely when the weather is very hot and dry. The higher the temperature the more likely it is that a fire will start or continue to burn.

They can start from human activity - either accidently or deliberately - or can start by natural causes like lightning. Bushfires often pass in just a few minutes but can smoulder for days.

High winds are a real threat as they can fan the flames and spread the blaze.

How common are they? 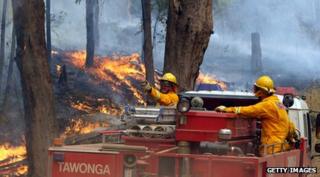 The danger period for bushfires varies across a country depending on the climate.

For most of southern Australia, the danger period is summer and autumn.

For New South Wales and southern Queensland, both in the east of Australia, the highest risk is usually in spring and early summer. The Northern Territory has most of its fires in winter and spring.

What can be done to stop them?

Lots of things can be done to make houses safer and lower the risk of damage from bushfires. 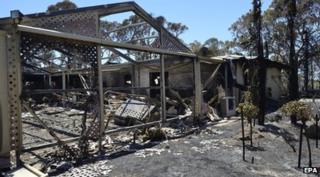 Fallen leaves, long grass and dead branches can easily catch light and should be removed from around houses. Also by closing windows and sealing gaps in a house, sparks and burning material can be prevented from getting inside.

Huge teams of firefighters are called in to control bushfires when they break out. Special planes known as air tankers are used be used to drop water from above and bulldozers can also be used to create emergency firebreaks.

What damage do they cause?

Bushfires can cause big problems for people living in the area, from burning down houses to filling the air with smoke. Across Australia, the damage caused by bushfires can cost more than £180million each year.