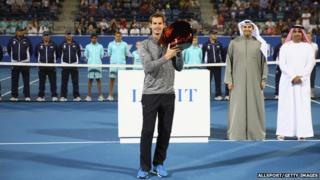 Andy Murray has won the Mubadala World Tennis Championship in Abu Dhabi, after Novak Djokovic withdrew from the final.

Djokovic, who is the world number one, said he was unfit to play ahead of the final of the exhibition event on Saturday because of illness.

His withdrawal automatically handed the title to Murray, who had beaten Rafael Nadal 6-2 6-0 in the semi-final on Friday.

It's the first title of 2015 for Murray, who now heads to Australia to compete in the Hopman Cup, as part of his build-up to the Australian Open.

The first grand slam of the year starts in Melbourne on 19 January.