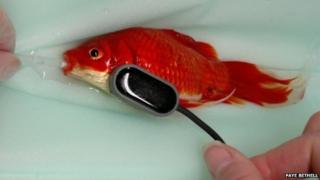 A goldfish which was constipated has undergone an hour long operation in Norfolk.

The owner of the goldfish took it to the vets when he noticed it wasn't well and paid £300 for the surgery.

The fish had a lump blocking its bottom, which vet Faye Bethell successfully managed to remove.

The goldfish was kept wet throughout the operation and its heart rate was monitored with a tiny probe. 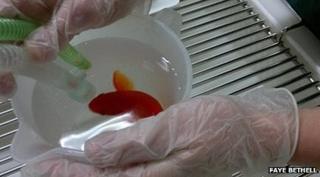 Faye Bethell
Anaesthetic was bubbled through the goldfish's water

"At the end of the day they're all pets and everybody does have a commitment to their pet," Miss Bethell said.

"The goldfish was constipated because he had a lump blocking his bottom, rather than because of his diet or any other reason," she said.