Metal detector fans in Buckinghamshire, England, have uncovered one of biggest collections of ancient coins ever found in Britain. 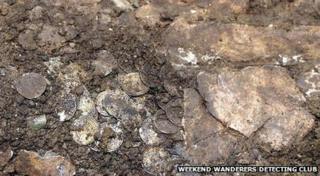 Paul Coleman from the Weekend Wanderers Detecting Club discovered more than 5,000 coins buried inside a lead bucket more than half a metre under a field near Aylesbury. 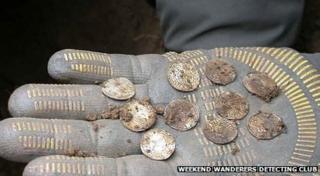 A spokesman for the national club said those on the dig had "agreed this was the most exciting day of their detecting lives".

The coins will now be taken to the British Museum in London, where an expert must decide whether this is actual "treasure".

A museum could then buy them with the money raised being split between the landowner and the finder.

The largest British collection of Anglo Saxon treasure was found in a field near Lichfield in Staffordshire in July 2009.

The 7th Century hoard of 1,600 items including helmet parts and crosses was valued at more than £3 million.