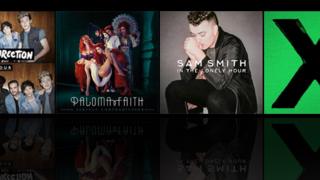 British artists that top the list include Sam Smith, Paloma Faith, Ed Sheeran and One Direction

British acts have filled the top 10 best-selling artist albums in 2014 for the first time, according to new figures from the UK music industry.

Singers including Ed Sheeran, Sam Smith and George Ezra have pushed out US artists from the annual list.

It is the tenth year in a row that the year's biggest-selling artist album has come from a British act.

The figures for 2014 were put together by the Official Charts Company and released by the British Phonographic Industry (BPI).

Geoff Taylor, chief executive of the BPI, said: "The remarkable success of British artists in 2014 is exciting news for the future.

"Our record labels are backing home-grown talent like Ed Sheeran, Sam Smith and George Ezra, who in turn are catching fire around the world."