Italian authorities have taken control of a ship carrying 450 people that was abandoned by its crew off Italy's coast.

The Italian coast guard said it was now heading to the port of Crotone after a rescue team managed to board the ship.

The Ezadeen lost power overnight off the south-east of Italy.

Italian Coast Guard Commander Filippo Marini told reporters that children and pregnant women were among the passengers on the vessel, most of who were believed to be Syrians escaping from their country. 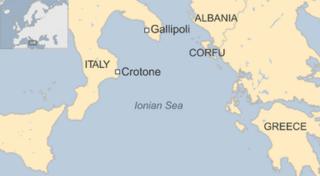 The abandoned ship, Ezadeen, is being taken to port of Crotone

Almost 1,000 people were rescued from another ship, the Blue Sky M, found abandoned without any crew earlier in the week.

The Italian Red Cross had previously said that four people were found dead on the ship.

But now officials now say no-one is known to have died on the ship, according to news service Reuters.

Civil war in Syria has increased the number of refugees crossing the Mediterranean this year.

The refugees often cross in unsafe boats, headed for Italy and Greece.

The passengers want to travel abroad for a better life but this way is illegal and dangerous. 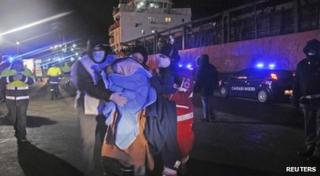 Reuters
Many of the people on the first ship, Blue Sky M are believed to have come from Syria

Thousands have died attempting the journey.