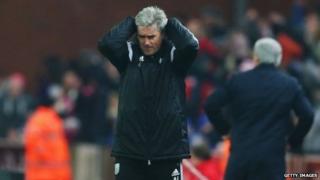 Alan Irvine has been sacked as West Brom manager after seven months in charge at The Hawthorns.

The 56-year-old Scot was given the job in June but he only won four of his 19 games as boss.

West Brom are 16th in the Premier League, a point above the relegation zone following Sunday's 2-0 defeat at Stoke, their seventh loss in nine games.

The club say they expect to be able to name a new manager by the weekend.