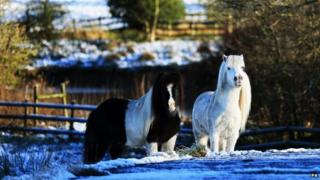 PA
Sub-zero temperatures come after snow fell in parts of the UK, including Langley, near Macclesfield

The lowest temperatures of 2014 for England, Wales and Northern Ireland were recorded overnight.

Katesbridge in County Down, Northern Ireland, hit -8.8C, while Benson in England fell to -7.6C.

The lowest temperature in Wales was recorded as -6.7C in Pembrey Sands.

The freezing weather come as parts of the UK have already been hit by sub-zero temperatures and forecasters warned of further plunging temperatures over the next three days.

A Met Office cold weather alert for northern England and the Midlands has warned of possible health risks for vulnerable people, such as the very young or old. 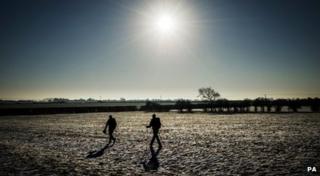 PA
Walkers in the snow in Granby, Nottinghamshire, on Sunday

BBC Weather's Peter Sloss said the cold temperatures mean it is already colder now than it was during "a good chunk of last winter", from January to March.

Sunshine on Monday was expected to raise temperatures during the day, he added.