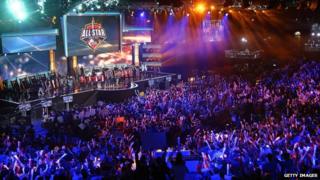 Competitive video gaming - known as e-sports - should be included in the Olympic Games, according to a top video game designer.

When asked by BBC reporter Colin Paterson whether video games should be an Olympic sport, Rob Pardo told BBC Radio 5 Live: "There's a very good argument for e-sports being in the Olympics."

Mr Pardo said: "Video games are well positioned to be a spectator sport."

He said: "Look at these professional gamers - [their] reflexes are lightning quick and they're having to make very quick decisions on the fly."

But he also said people would need convincing that video games can count as a sport.

Mr Pardo said: "If you want to define sport as something that takes a lot of physical exertion, then it's hard to argue that video games should be a sport."

"But at the same time, when I'm looking at things that are already in the Olympics, I start questioning the definition," he added.

For e-sports to appear at the Olympic Games, the International Olympic Committee would first have to recognise video games as a sport, which is highly unlikely.

Board game fans have previously called for chess to be an Olympic sport, but the IOC said it is a "mind sport" and therefore not welcome in the Olympic Games.