'Injured parrot' in Aberdeen was actually a Christmas hat 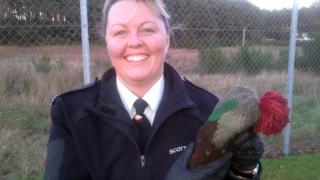 A woman was left embarrassed after calling in the Scottish SPCA to rescue an injured parrot that turned out to be... a Christmas hat!

The charity was called to the scene in Aberdeen after what a driver believed to be a parrot was seen in the middle of the road.

However, when they got there they discovered it was actually a festive woolly hat.

Animal rescue officer Karen Hogg said: "It's fair to say the lady who called was mortified when I called her back."

Karen said: "When I got there it was a nice surprise to find there wasn't an animal in danger and I must admit it gave me a bit of Christmas cheer.

"If anyone recognises the hat they are welcome to come and collect it.

"Although this incident turned out to be a false alarm, we'd always encourage people to give us a call if they think an animal is in need of help."