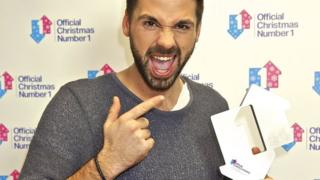 The X Factor's Ben Haenow has taken home the prize that every pop star wants - to be number one at Christmas!

The Official Charts Company announced that the former van driver had beaten Bruno Mars and Mark Ronson to the top spot with his single Something I Need.

Being number one at Christmas is a big deal in the music industry.

For the first time ever, the number of plays a song got online counted towards the Christmas chart.

And that worked well for Bruno Mars and Mark Ronson as their track Uptown Funk broke the record for the most streams in one week. It was played a massive 2.34 million times!

But it wasn't enough to beat Ben Haenow.

The streaming and download data also helped old songs like Mariah Carey's All I Want For Christmas Is You make it back into the chart at number 18.

Artists that appeared on the X Factor have dominated the Christmas charts in recent years. They were number one for 7 out of the last 10.

Ed Sheeran had the best selling album in the chart with X (pronounced multiply).