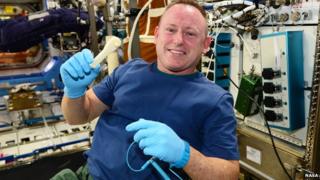 Astronauts on the International Space Station have used a 3D printer to make a tool called a wrench - in space!

The company that made the 3D printer onboard the ISS heard that astronaut commander Barry Wilmore needed a ratcheting socket wrench.

Usually he would have to wait for it to be flown up to them on one of the regular supply ships.

Instead the company designed the tool by computer, then emailed it to the ISS, who printed it.

The first object it made was a replacement part for the printer itself.

But the wrench is the first object to be sent from Earth to be made in space.

It's got scientists very excited about the future - as it could mean the astronauts onboard could potentially make their own spare parts and equipment.