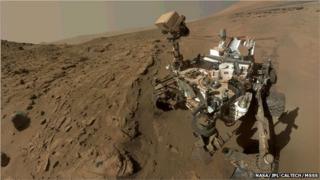 Nasa's Curiosity rover has detected the gas methane on Mars - a possible sign that life once existed or could still exist on the red planet.

The robot sees very low-level amounts constantly in the background, but it also has measured a number of short-lived spikes that are 10 times higher.

Methane on the Red Planet is interesting because here on Earth, 95% of the gas comes from living things.

The Curiosity team cannot identify where the methane is coming from.

Scientists believe the most likely source is underground stores of the gas that have been disturbed.