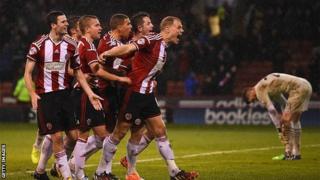 League One Sheffield United shocked their Premier League opponents Southampton to reach the semi-finals of the League Cup.

The Saints struggled throughout with Sheffield United's Jamal Campbell-Ryce and Louis Reed going close to scoring in the first half.

But Marc McNulty got the winner after Southampton goalkeeper Fraser Forster failed to hold a free-kick. 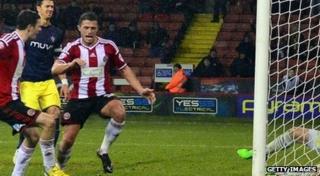 Florin Gardos was sent off late on to add to Southampton's misery as the hosts secured a famous win.

"It is an incredible night for the club," said Sheffield United manager Nigel Clough.

"I thought we deserved the victory, we created more chances and the only disappointment was that we should have had another goal.

"Whoever we get in the semi-final will be a special occasion, but nights like tonight stay in the memory for a long time." 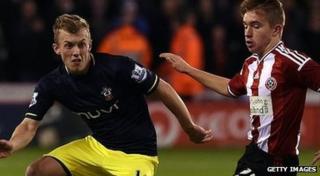 They had lost their four Premier League fixtures prior to the trip to Bramall Lane and Sheffield United, FA Cup semi-finalists last season, sensed the chance of an upset from the outset.

"It looks like everything is against us at the moment. We have to accept that and we have to go on," said Southampton boss Ronald Koeman.

"The worst feeling about today is the fans deserved more than that from our game and that's painful."