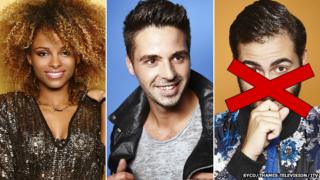 Italian singer Andrea Faustini was eliminated during the first part of the X Factor grand final on Saturday.

The public alone decided the result, and Andrea had received the fewest votes out of the final three.

As part of the final he had performed a duet of pop hit Ghost with Ella Henderson.

Andrea told host Dermot O'Leary: "This has been the most crazy and beautiful experience of my life."

Fleur East and Ben Haenow, both mentored by Simon Cowell, will compete for the X Factor tiara on Sunday.