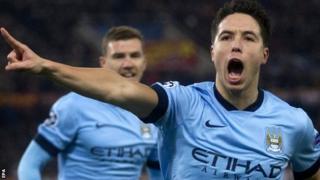 Manchester City qualified for the Champions League last 16 for a second successive season as a win at Italian side Roma put them through alongside Group E winners Bayern Munich.

Samir Nasri scored from 25 yards after the half-time break before Pablo Zabaleta fired in from close range.

It completed a remarkable turnaround for the Premier League champions, who looked to be heading out of the competition after failing to win any of their first four games. 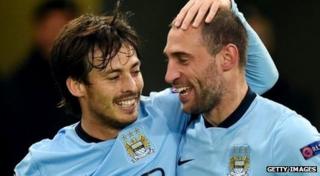 However, a 3-2 home win over German champions Bayern, which included a Sergio Aguero hat-trick, kept alive their hopes of making the last 16 - and they took full advantage with a stunning display in Rome.

Chelsea rounded off their Champions League group stage with a fourth victory and denied Sporting Lisbon qualification for the knockout stages. 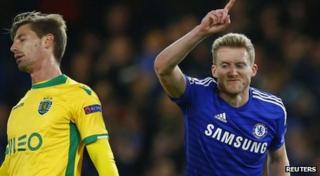 Cesc Fabregas put the home side ahead early on with a penalty after Filipe Luis had been fouled by Ricardo Esgaio.

Andre Schurrle doubled the lead soon after with a low right-foot strike.

Sporting pulled a goal back in the second half through Jonathan Silva, before John Mikel Obi tapped in from a Fabregas free-kick to secure the win.