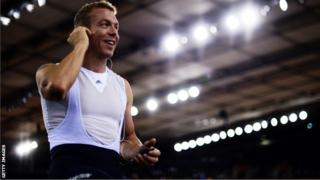 Record-breaking cyclist Sir Chris Hoy will be given the lifetime achievement award at the BBC Sports Personality show in Glasgow on Sunday.

The six-time Olympic gold medal-winner will be honoured at the SSE Hydro arena, in his home country of Scotland.

"I never thought I'd see my name alongside the likes of Sir Steve Redgrave, David Beckham, Seve Ballesteros and others who've received this honour," said Hoy.

He retired from competition in 2013.

Hoy said it would be "even more special" to be given the award in Scotland, which hosts the show - now in its 61st year - for the first time.

"He is the marker for everybody else because he was, in some ways, the model athlete off the bike as well as on it," said Wiggins.

"I think he's right up there, not only for British athletes but in terms of world athletes. I put Chris up there with the Usain Bolts of this world."

Hoy was the first British Olympian for 100 years to claim three golds at one Games at Beijing in 2008, having won his first Olympic title in Athens four years earlier and a silver at Sydney 2000.

The track cyclist from Edinburgh picked up the BBC Sports Personality of the Year award in 2008 following his hat-trick and was given a knighthood in the New Year Honours list.

At the 2012 Olympic Games in London, Hoy claimed his fifth and sixth gold medals - the most won by a British athlete in Olympic history.

He also secured two gold and two bronze medals for Scotland at the Commonwealth Games.