More than half a million people have fled coastal villages in the area, which was still recovering from Typhoon Haiyan last year.

Haiyan was the most powerful typhoon ever recorded over land.

In Tacloban, where thousands were killed by Haiyan, roofs have been blown away and streets are flooded. 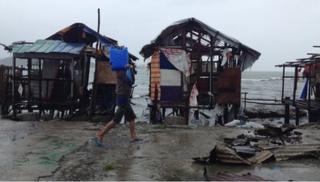 People have already started to clear up along the seafront

But Hagupit does not appear to have been as severe as many had feared.

So far it looks like there aren't any casualties.

The authorities think it's because they were well prepared this time, but it could be some time before the extent of damage in more remote areas becomes clear.

BBC reporter, Jonathan Head in Legazpi, about 200km (125 miles) north of Tacloban, said Hagupit was clearly a powerful storm but nowhere near as powerful as Haiyan. 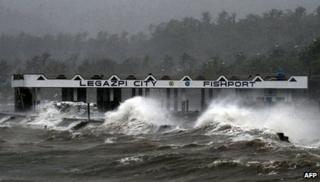 Joey Salceda, governor of Albay province, told the BBC that the main lesson from Typhoon Haiyan had been to prepare well and to evacuate people from vulnerable areas.

"That's what we've been doing, so our principal instrument to achieve zero casualties is essentially evacuation," he said. 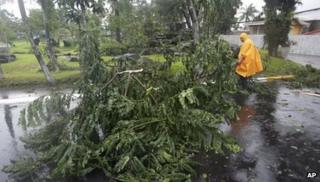 AP
Trees were also brought down in Legazpi

Hagupit, known locally as Ruby, was packing winds of 175km/h (109mph) and gusts of 210km/h (130 mph) when it hit land in Dolores in Eastern Samar province on Saturday evening local time. 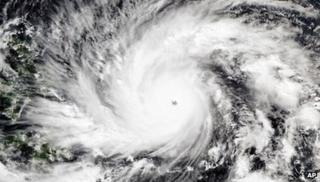 Hagupit's huge diameter of 600km (370 miles) meant that about 50 million people, or half the nation's population, were living in vulnerable areas, officials have said. 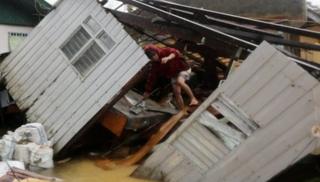 EPA
In Borongan city, north-east of Tacloban, buildings were ruined by the strong winds

Typhoon Hagupit heads for the Philippines