Little piglet rescued from sea by RSPCA off Suffolk coast 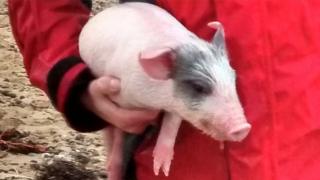 A piglet has been rescued after tumbling down a cliff and swimming out to sea off the Suffolk coast in England.

The little pig had been stuck on a cliff, but when RSPCA staff arrived it had run down to the beach and was heading into the sea.

Inspector Jason Finch said it seemed "unfazed" as it splashed in the waves.

"I thought he was heading to France," he said. 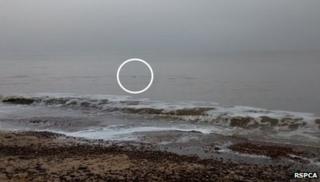 RSPCA
Can you spot the piglet?

"I have never seen anything like it. I couldn't believe it when he darted straight into the sea like that," he added.

"He was completely unfazed by the bubbling surf and was in the water upwards of 10 minutes."

"He became a tiny black dot in the distance... I was just wondering whether I would have to dive in myself when he started swimming in the more shallow end of the surf, so I just ran in and grabbed him."

"He was safe and sound and in good health, in fact he did not even seem puffed out. Far fitter than many I know," said Mr Finch. 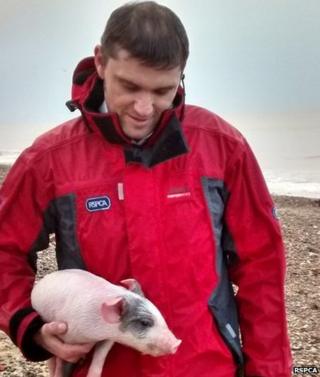 The adventurous little pig was later returned to its owner.