How does an electric eel control its prey?

A jolt from an electric eel does more than just stun its prey, scientists say.

Researchers found that their high-voltage strikes can also control the muscles of the fish they hunt.

They can use electric charges to make fish easier to capture, either by stunning it or making it "jump" to show where it's hiding. 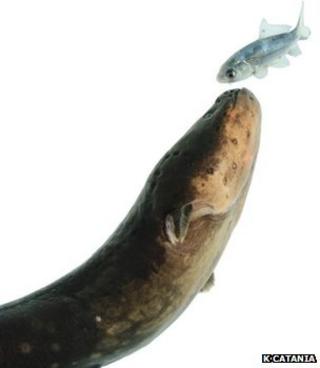 Kenneth Catania, who led the study, set up small tanks to test the eels' hunting abilities - putting an eel and a fish into the same water.

When they spotted their prey, the eels released pulses of electricity that appeared to stop the fish.

The electric pulses activated the nerves that controlled the muscles in their prey. 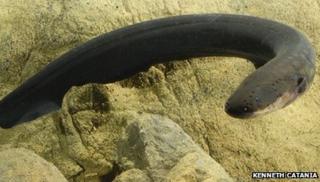 "It's amazing in the first place that they can give off electricity," said Dr Catania.

"To use that to control their prey's nervous system is incredible."

The study has been published in the journal Science.