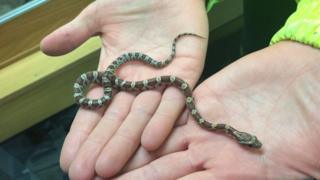 A wildlife charity wants to find the owner of a tiny stray snake which was mistaken for a loom band bracelet in Aberdeen.

The Scottish SPCA was called in when rubbish collectors found the baby corn snake outside a house.

The little snake, nicknamed Mac, is now in the care of the charity's Aberdeenshire Animal Rescue and Rehoming Centre.

'Thought he was a loom band'

She said: "Mac was discovered by two waste removal men who were loading an old sofa onto their van.

"He had slithered his way between the cushions and the men actually thought he was a loom band before he started moving.

"Mac is good to handle and it's possible someone is missing him."

If no-one comes forward to collect the snake, rescue officers will try to find a new home for Mac.