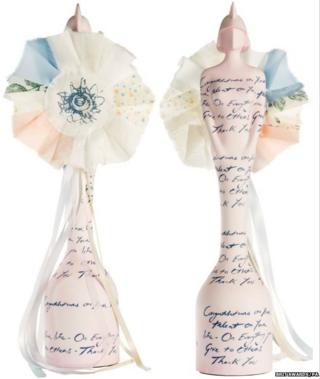 This is the big trophy pop stars in Britain will want to win - it's the newly designed Brit Award for 2015.

British artist Tracey Emin has given the statue a light pink colour and a rosette.

She described the rosette as "slightly shieldish, but also like a pair of wings".

The statue also has the handwritten message: "Congratulations on your talent on your life. On everything you give to others. Thank You."

It's the fifth time the award has been given a makeover by a top British designer.

Tracey said: "You want to do it really well. You don't just want to decorate it, you want to make something that is really Tracey-ish, that is special for the people receiving it."

I'm A Celebrity legends Ant and Dec are going to host the show.

One Direction and Bowie - who won at the Brit Awards 2014?