Protesters and police have clashed in Hong Kong, south-east Asia, as hundreds of demonstrators tried to surround government offices.

It's some of the worst trouble in two months of protests, with police using pepper spray and batons.

Police say 40 people have been arrested and a number of officers were injured.

The demonstrators are calling for the right to choose their leader without interference from China.

Read more: Why are there protests in Hong Kong? 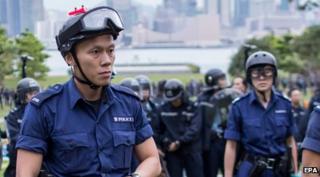 Why are people in Hong Kong protesting?

Hong Kong is a region that used to be run by Britain up until 1997, but it is now under the control of China.

The protests are over the upcoming election of Hong Kong's next leader, or chief executive, which will happen in 2017.

China has promised that everyone in Hong Kong will be allowed to vote in that election - something that hasn't happened before.

But it has also said it wants the final say on who can run to be leader. 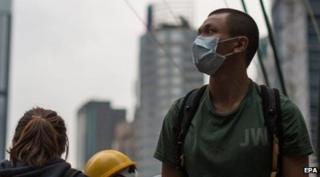 EPA
A protester in Hong Kong

The protesters, many of them students, aren't happy about this - they want to be able to decide without any interference.

But others, such as businesspeople, argue that this is a step forward and that the protests are "endangering" Hong Kong and its relationship with China.