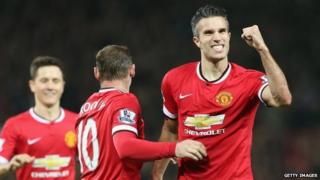 It was another busy weekend in the Premier League packed with goals, surprise performances and red cards.

Newsround rounds up what happened across the country.

Click here for our picture gallery of Sunday's action.

Sunderland became the first team this season to stop Chelsea scoring as they earned a deserved 0-0 draw. 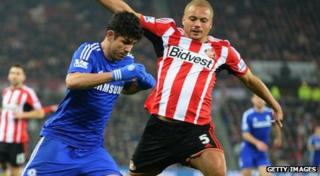 Gus Poyet's team frustrated and tested the Premier League leaders with a display of discipline and organisation.

Diego Costa was booked for catching defender Wes Brown in the face with his arm - making him suspended for Chelsea's next game, against Tottenham.

The draw sees Chelsea seven points clear at the top of the table ahead of Southampton, who play third-placed Manchester City on Sunday.

Robin van Persie's powerful strike capped an impressive win for Manchester United over Hull and offered the perfect response to those who have questioned the Dutchman's early-season form.

United Manager, Louis Van Gaal, hailed the victory as their best match of the season.

Charlie Austin was the match winner for QPR who moved off the bottom of the table by beating struggling Leicester. 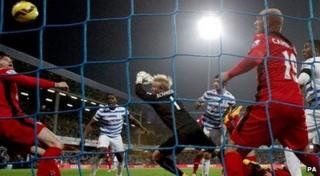 The visitors ended their five-game goal drought early on as Esteban Cambiasso swept in from the edge of the area.

QPR forced an equaliser as Wes Morgan scored an own goal, before midfielder Leroy Fer put them in front, smashing home from close range.

Leicester's Jeffrey Schlupp nearly earnt his side a draw, but Austin's header won it for QPR.

Aaron Cresswell scored his first Premier League goal as West Ham moved up to fifth in the table with victory over 10-man Newcastle. 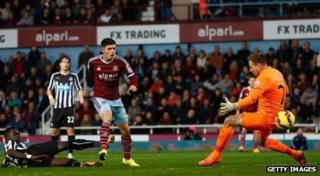 The defender's 56th-minute strike ended the Magpies' run of five successive league wins and handed the Hammers their first in four.

Newcastle finished with 10 men when captain Moussa Sissoko was shown two yellows in the space of 46 seconds.

The Gunners started the fixture with their lowest points tally after 12 games in 32 years, but Danny Welbeck's powerful header gave them victory. 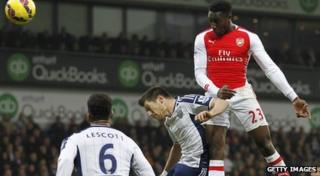 West Brom have not scored a league goal for more than 300 minutes.

Liverpool 1-0 Stoke: Glen Johnson scored the only goal of the game to help lift the pressure on his manager Brendan Rodgers as Liverpool beat Stoke at Anfield.

Swansea 1-1 Crystal Palace: Crystal Palace produced a spirited display to earn a point from a lively encounter at the Liberty Stadium.