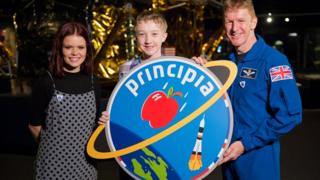 The winner of Blue Peter's space badge competition has been revealed.

Thirteen year-old Troy's design was chosen by the judges from more than three thousand entries.

It'll be turned into a mission patch for British astronaut Tim Peake to wear when he goes into space next year.

Tim said: "My final choice was not easy to make, but I chose Troy's design because his patch was simple but included many references to my mission."

The winner was revealed on Thursday's Blue Peter.

Troy said: "It was amazing to meet Tim Peake, such a great experience. I'm a big fan of all things space related.

"I did quite a bit of research before coming up with the idea but the actual design only took me about two hours."