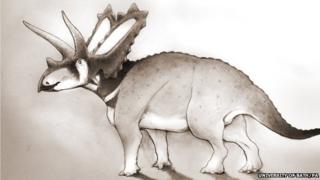 A new species of horned dinosaur has been identified from fossils held in a Canadian museum for 75 years.

The fossils had previously been classified as belonging to a different dinosaur group.

But Nick Longrich from the University of Bath said the remains represent a new species of the dinosaur - Pentaceratops.

Pentaceratops is a smaller cousin of the familiar plant-eater Triceratops.

Details of the research have been published in the journal Cretaceous Research.

The journal says Pentaceratops lived about 75 million years ago.

Dr Longrich said: "We thought we had discovered most of the species, but it seems there are many undiscovered dinosaurs left."