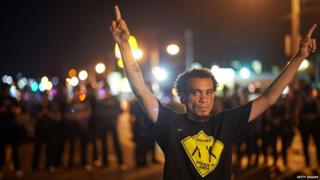 Reports suggest that more than 100 people may have been arrested in the US city of Ferguson, during protests to mark the anniversary of the death of a black teenager.

Authorities in Ferguson have called a state of emergency because of the protests, which means normal rules are temporarily changed, so that the police can get control of the situation.

It comes a year after an 18-year-old called Michael Brown was shot dead by a white police officer.

The officer was not punished and that sparked major protests across America by people who said it showed black people's lives mattered less than those of white people.

Since then, a number of other unarmed black men have also been killed by police, and lots of people have claimed that black people are treated badly by the police.

But the demonstrations became violent, and another black teenager was injured when guns were fired in a battle with police.

Violent protests took place in Ferguson, Missouri, and in other parts of America.

The riots started after it was announced a white police officer would not be charged for shooting dead a black teenager, called Michael Brown, back in August.

Shops were robbed, cars and buildings were set on fire, and bottles and stones were thrown.

US President Barack Obama called for the protests to stay peaceful.

He was echoing the views of Michael Brown's parents who also appealed for clam despite saying they were "profoundly disappointed" by the jury's decision.

Many people in Ferguson, in the US state of Missouri, were angry because they feel black Americans are treated badly by the police.

Protests also took place in other parts of America, including in New York.

Click here for advice if you're upset by anything you see or hear in the news.