One Direction's Four and Band Aid 30 hit number one 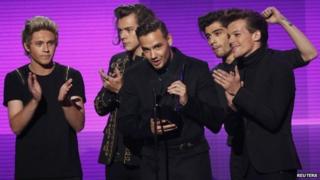 Reuters
One Direction at the American Music Awards

The Four-midable One Direction have scored their third UK number one album.

The group also feature on the new number one single, Band Aid 30's Do They Know It's Christmas?

The charity single sold over 312,000 copies, making it the fastest selling song of the year so far.

The fab five had something else to celebrate - they were named artist of the year at the American Music Awards on Sunday night in Los Angeles.