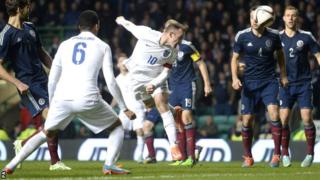 Wayne Rooney closed in on Sir Bobby Charlton's all-time England record of 49 goals as his side gained a comfortable victory against Scotland at Glasgow's Celtic Park.

Scotland were hoping to build on their Euro 2016 qualifying win against the Republic of Ireland on Friday by beating their closest neighbours.

Rooney, however, had other ideas with two second-half goals to add to Alex Oxlade-Chamberlain's opener as England secured a fully deserved win on their first visit to Glasgow since 1999. 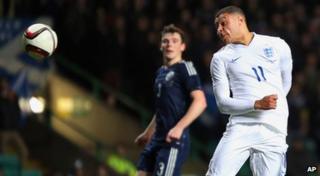 The England captain now has 46 international goals, his second coming late on to snuff out brief hopes of an unlikely Scotland revival after Andrew Robertson had pulled one back.

It was a happy night for England manager Roy Hodgson, who has now seen his side win six games in a row as they rebuild after the disappointment of their early World Cup exit in Brazil. 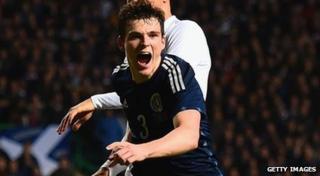 For Scotland, who looked tired following their efforts against the Republic of Ireland, comfort can be taken with the knowledge that their main business in this international period was winning that qualifier, which they achieved successfully.

Scotland had only two Premier League players in their starting line-up, Hull City's Robertson and Everton's Steven Naismith and at times that gulf in experience and class was all too obvious.