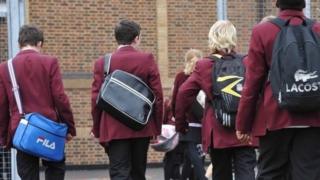 The government says it will spend £2million on tackling homophobic bulling in schools.

One type of homophobic bullying is when people use words like "gay" or "lesbian" as an insult.

Nicky Morgan, the government politician in charge of education and equality, said: "Young people can sometimes use language either thoughtlessly or deliberately."

She said homophobic bullying can "lead to other problems... not only not getting your qualifications, but things like mental health problems as well".

Homophobic bullying became an issue for Jessica and Libby on CBBC show Our School.

Somebody called Jessica a lesbian (a girl who dates girls) to try and upset her.

Jessica and Libby told a teacher what had happened and the school held a workshop to tackle homophobic bullying.