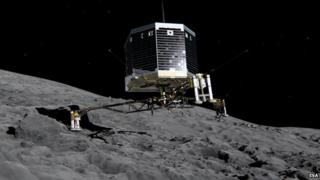 After a ten-year journey across the Solar System, a European robot probe, Philae, has made history by landing on a comet, the first spacecraft to ever achieve this the feat.

Very happy scientists received a signal from the Philae probe a few minutes ago confirming it had touched down safely on the icy surface of the two-kilometre-wide comet.

The tricky and complicated landing took place as the probe and comet sped through space at more than 40,000 miles per hour.