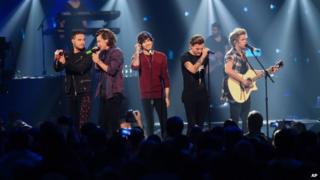 The boys weren't at the ceremony in Glasgow but Harry, Louis, Niall and Liam sent a video message thanking fans for their support.

Katy Perry, 5 Seconds of Summer and Ariana Grande picked up two awards each.

The ceremony was hosted by rapper Nicki Minaj.

She said: "I've been learning so much about your beautiful country and culture... I've pretty much become Scottish."

The awards in full