Schoolboy inventor is given funding for printer idea 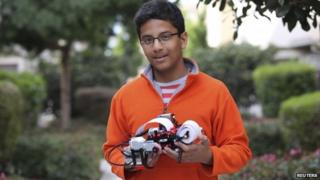 A schoolboy from California has secured funding to bring his idea for a low-cost Braille printer to market.

13-year old Shubham Banerjee has been promised a few hundred thousand dollars to develop his idea by tech company Intel.

The teenager originally created a prototype of a Braille printer out of Lego when he was just 12.

He was invited to show this early version of the printer at the White House in Washington DC.

Some blind people use Braille in order to read books.

It is a system of writing which uses raised dots and bumps which can be felt.

A Braille printer will provide blind people with the chance to print out and read pages from the Internet as well as other text documents. 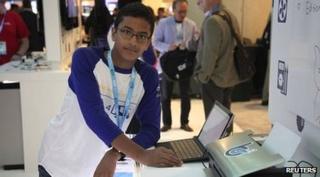 Reuters
Shubham with an early version of Braigo v2.0 in September

It has been difficult to develop electronic Braille printers in the past due to their cost.

Shubham originally came up with the idea for a science fair. He then set up his company Braigo Labs with funding from his parents.

He is now working with the tech company on a new version using a budget-priced chip and 3D-printed parts.