Berlin Wall anniversary: Fall of the wall 30 years on 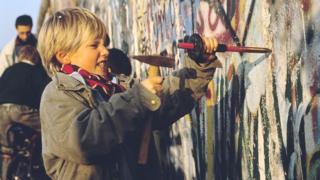 Getty Images
This photograph - taken on 12 November 1989 - shows a young boy chipping away at a section of the Berlin Wall, as the people in Berlin destroyed the wall that had divided their city for almost 30 years

On 9 November 2019, the world is remembering 30 years since an important moment in history - the day when the Berlin Wall came down in 1989.

The Berlin Wall was built in 1961, at a time when Europe was divided in two. The wall itself divided the German capital city of Berlin for almost 30 years.

It appeared overnight, much to the surprise of people on either side of it, and stopped people moving from one part of the city to the other.

On 9 November 1989, it was torn down and people could finally move freely.

Read on to find out more about why it was built, what life was like with the wall, and how it was brought down after almost 30 years.

The Berlin Wall was built in the aftermath of World War Two. Find out more about this important conflict.

The world remembers the end of World War Two

Why was the Berlin Wall built?

At the end of World War Two in September 1945, Germany surrendered to the Allies - a group of Western countries including Britain, America, France and the Soviet Union (a collection of Eastern European countries run by Russia).

The Allies decided to divide control of Germany between themselves. Each took responsibility for a different part of the country. Britain, America and France took over the areas in the west of Germany and the Soviet Union controlled the east.

Berlin was in the Soviet zone, but as it was the capital of Germany, it was decided that it would also be divided into four areas - one controlled by each of the four countries.

The division of Germany was an important part of something called the Cold War.

The Cold War was a 40-year conflict between the east and the west. It came to an end in 1991, just after the Berlin Wall came down.

What was the Cold War and what does it have to do with the Berlin Wall? 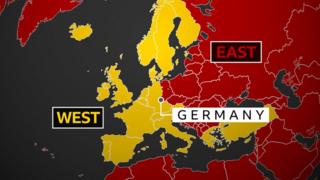 This map shows the divide between the east and the west

By 1949, Germany had become two separate countries - The Federal Republic of Germany (West Germany) - run by Britain, America and France - and the German Democratic Republic (East Germany) run by the Soviet Union.

After the division of Germany, it quickly became clear that the Soviet Union had very different ideas to the Allies about how their section should be run.

West Germany was run in a similar way to how Britain and America is today with people free to move around, listen to whatever music they like and express their opinions.

East Germany was much stricter with tight rules on how people should behave and a police force that monitored what they did.

As the years went on, thousands of people were escaping from East Germany to the West every single day - even though the main reason that the wall was built around West Berlin was to avoid this happening. 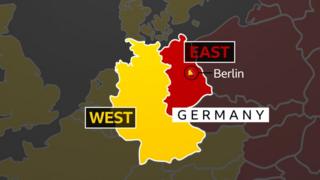 This map shows how Germany was split down the middle, with the capital city of Berlin in the Soviet-controlled east side of the country
How was the Berlin Wall built?

In 1961, the leader of the Soviet Union at the time - Nikita Khrushchev - ordered a wall to be built between East and West Berlin, to stop people leaving East Germany.

It was constructed really quickly, appearing overnight on the 13 August.

Many people woke up to find they were trapped on one side, often separated from their friends and family in the West.

The wall started as barbed wire and fencing.

But over the years, it became a series of walls, strengthened fences, gun positions and watchtowers, which were heavily guarded and patrolled to make sure that people did not cross from one side to the other. 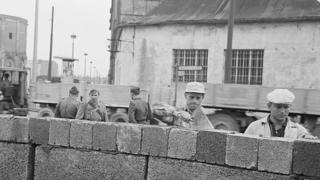 Getty Images
This picture shows East German workers building the Berlin wall in 1961, while being watched by communist police 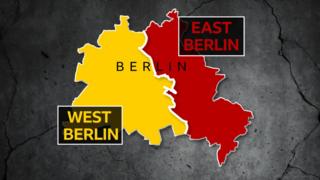 It was in fact made up of two walls which ran parallel to each other, with an empty strip of land running in between them. This was guarded by soldiers and filled with mines to stop people from crossing the border.

It became a symbol of the division in Europe between the West and the East, and became known as the 'iron curtain'.

Soviet Union leaders said it was a protective shell, but Britain, America and France saw it as a prison which stopped people leaving the East.

Around 5,000 people tried to escape over the wall, but it was very difficult and dangerous.

Life for people in East Berlin was difficult. Everything they did was heavily controlled by the authorities and rules about how they could live were very strict.

People in East Berlin who had previously worked in West Berlin lost their jobs.

Those with friends and family living on the other side to them became separated from their loved ones. For many, they wouldn't see them again until the wall came down. 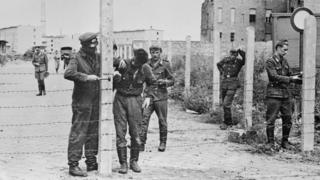 Getty Images
This picture from 14 August 1961 shows soldiers putting up a barbed wire barrier in preparation for the full construction of the Berlin Wall
What happened to the Berlin Wall?

In the 1980s, protests began against the way the Soviet Union controlled lots of countries in Eastern Europe.

People in the East wanted more freedom to go where they wanted, listen to the music they liked and voice their opinions freely - all things that they were not able to do under Soviet rule. They began demanding that they be allowed to leave.

After hundreds of East Germans escaped via neighbouring countries like Hungary and Czechoslovakia, the government in East Berlin found it increasingly hard to stop the calls for people to be allowed to cross into West Germany.

On 9 November, the leader of East Germany gave a TV speech in which he said that the border between the East and West would be opened.

Thousands of people from East Germany went to the wall and demanded that the guards open the gates.

The border guards could not control the rush of people so they had no choice but to step back, and thousands of people crossed over to West Germany. 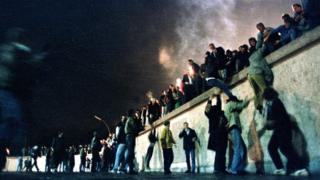 Reuters
On 9 November 1989, there were scenes of great celebration in Berlin as thousands of people flooded across the Berlin Wall
What was it like when the Berlin Wall came down?

Crowds of people on the western side of the wall were waiting for them.

The celebrations started immediately, with family and friends embracing each other after many years apart. Some even climbed to the top of the wall and danced on it.

The date on which the wall 'fell' is considered to have been 9 November 1989, but the whole wall was not torn down immediately. 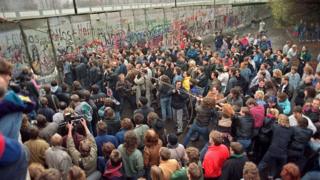 Over the following weeks, many people started to smash it down with sledge hammers and took pieces of the wall to keep because it had become so symbolic.

The government finally destroyed the wall in 1990, although many parts of it have been left for people to see today.

The following year, East and West Germany began to have conversations about reuniting the country.

On 3 October 1990 - 11 months after the fall of the Berlin Wall - East and West Germany were formally reunited as the country of Germany that we know today.