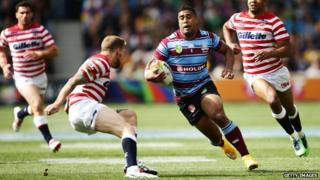 Australia have won their Four Nations match against England. The match ended 16-12 in Melbourne.

Ryan Hall almost scored a try for England in the last minute but it was not given.

Australia had lost their opening game to New Zealand.

Michael Jennings put Australia in the lead but England went ahead through Kallum Watkins and Ryan Hall. Ben Hunt scored on his Australia debut and Greg Inglis went in for the win.

Australia, New Zealand and England still have a chance to make the final.